Happy May Day!  Do you know what May Day is?  I didn't - it's not really celebrated here on the West Coast...I read it's celebrated in the mid-west.  Of course I'd heard of May Poles and May Baskets, but I didn't really know what they were about.  Here's the condensed definition of May Day (found on various online sites):﻿
May 1st, often called May Day, just might have more holidays than any other day of the year. It's a celebration of Spring. It's a day of political protests. It's a neopagan festival, a saint's feast day, and a day for organized labor. In many countries, it is a national holiday.
And here's where some of the traditions came from:
Bringing in the May
In medieval England, people would celebrate the start of spring by going out to the country or woods—"going a-maying"—and gathering greenery and flowers, or "bringing in the may." Another English tradition is the maypole. Some towns had permanent maypoles that would stay up all year; others put up a new one each May. In any event, the pole would be hung with greenery and ribbons, brightly painted, and otherwise decorated, and served as a central point for the festivities. In the 19th century, people began to braid the maypole with ribbons by weaving in and out in the course of a dance. Other later traditions include making garlands for children and the crowning of the May Queen.
Roots of May Day celebration in America:

The Puritans frowned on May Day, so the day has never been celebrated with as much enthusiasm in the United States as in Great Britain. But the tradition of celebrating May Day by dancing and singing around a maypole, tied with colorful streamers or ribbons, survived as a part of the English tradition. The kids celebrating the day by moving back and forth around the pole with the the streamers, choosing of May queen, and hanging of May baskets on the doorknobs of folks -- are all the leftovers of the old European traditions.
At Let's Get Peachy this month, my altered arts DT assignment was to do something for May Day.  I decided to do a May Basket.  My 1st attempt, a rolled up paper cone to hang on a doorknob filled with candy, was cute as a child's project, but I did not like it as a project from me.  Then I saw that someone made one from a mason jar...a mason jar vase that hangs from a doorknob!  FUN!  I couldn't wait to do this.  I looked up lots of fun examples of what has also become a hot trend for wedding centerpieces, mason jar vases.  I wanted mine to be shabby chic...to remind me of the display windows where my oldest works (Anthropologie).  Here's what I did:
I took a mason jar (I am always saving these from spaghetti sauce...my daughter uses them all the time to stuff with candy for her friends, she alters them too...chip off the old block LOL).  I had some craft wire on hand, 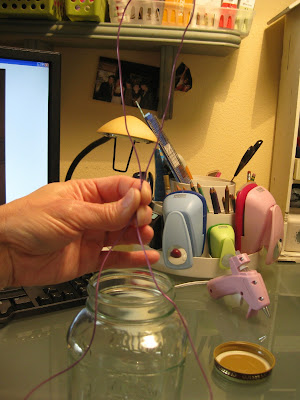 so I figured where was a good spot for the "handle" to hang on the doorknob, and twisted there, 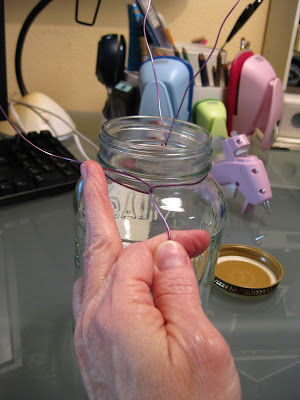 then I wrapped the two wires around, and at the front I did two "u"s, to connect, and go back around (to make it sturdy)...wow, Just realized how old my hands look LOL ;) 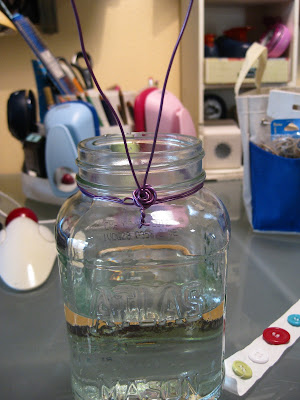 then I wrapped them around the handle a few times, and twisted them.  I covered this later with a piece of twine and a little flower.  After I did this part, just to make sure it was secure enough, I filled the jar with water and hung it on my bedroom door for a couple of hours...it worked, whew! 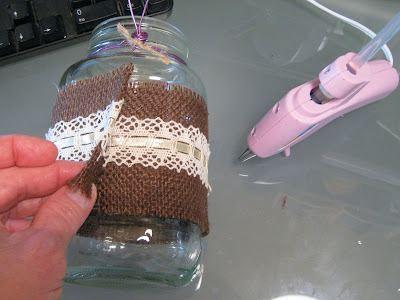 I attached some lace to a piece of burlap that I cut to fit the jar, and hot glued it on, folding over the top piece so it would be finished. 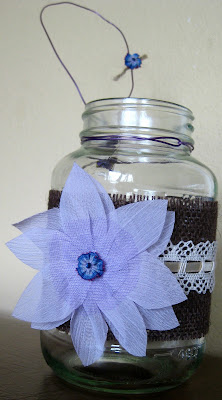 Then, I added the big flower...which is a remnant from a shirt I had :)  and the little flower in the center from my stash, which I also added one of those to the handle and another to the back.  I added an extra piece of purple tulle to the center of the flower too. 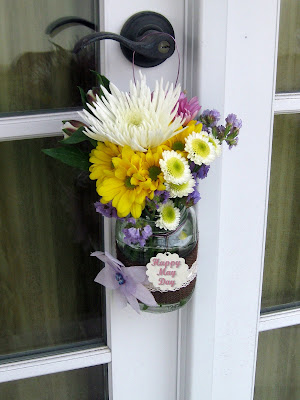 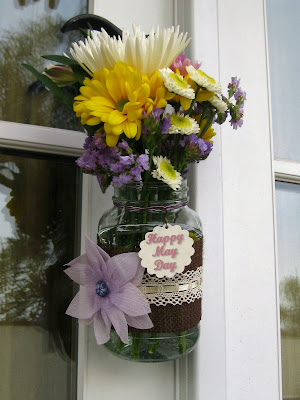 Then I added a home made "Happy May Day" tag to it and ta da!  Here it is with flowers.  I like that I can change the tag up, you know, for whatever season...or maybe hang a cute charm.  What do you think?  Thanks for letting me share,
Tammy :)

Posted by ShoppingTamii at 7:00 AM

Cute! Will have to try it next time we eat spaghetti!!!

Tammy, this turned out wonderful. Would look so nice on my front porch.....

This is so beautiful.... a great way to usher in May!
*smile*
Cindy Kat