For my "outdoor" project at Let's Get Peachy I thought a memory jar would be fun...I've always wanted to do one.  Then I was on the phone with my oldest, Jessica, one day and she said "I want to do one of those jars where you put stuff from your vacation in"!!!  Was she reading my mind????  So, she came down for a visit, and brought stuff with her to put in it.
My 1st step is collecting what I think I will use...I went to Goodwill and bought a couple of jars, she liked this one, a tag, some hemp (we didn't end up using that), and my Seven Gypsies pre-stamped stamp, and the stuff from her trip to Napa Valley: 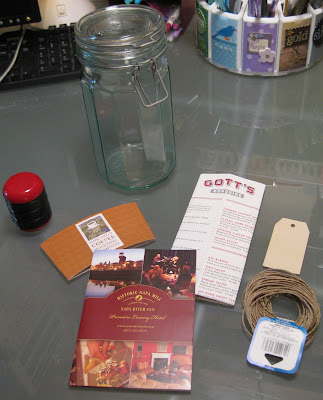 And here's what we came up with, notice that instead of the hemp, we used some Jillibean Soup bakers twine, and she wrote with my Zig Millennium pen on the tag.  We basically just fit the things in, in a way that she liked: 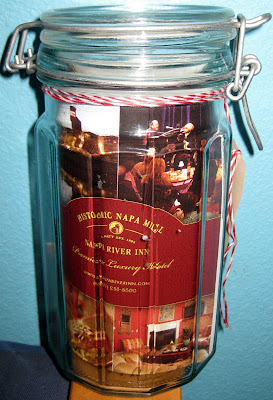 She may add a few more things when she gets home.
It was so easy to do, but in my head I wanted to do something else...but this one was for her.  So, I thought I'd make myself one.
So, I gathered my stuff.  I used the other jar from Goodwill.  I found a photo of my husband and my younger two, Courtney and Hunter, from our trip a few years ago up the coast.  This was at our tour of the 17 Mile Drive in Pebble Beach.  I also had the pamphlet still.  The magnets were from there, but just for inspiration, the shells I had, and the sand, well let's just say that living 1/4 mile away from the beach made that happen LOL ;) 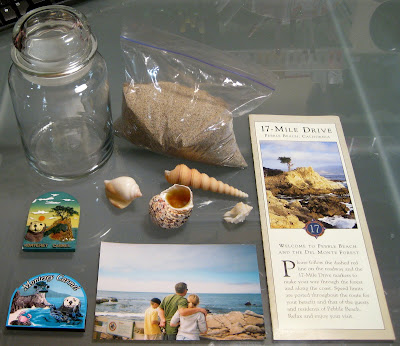 Here's what I came up with, I also used some K&Company ribbon, and rub-ons from my stash.  I matted the photo to some cardstock...I had to loosen it from the paper when I went to put it in the jar, 'cause it wrinkled up when I bent the cardstock.  On the back of the cardstock I placed some stuff from the pamphlet.  I used some tape, I think by Me and My Big Ideas, to help hold that in place inside the jar: 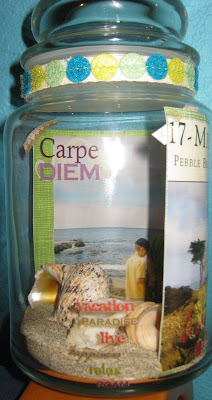 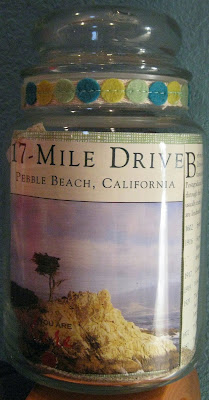 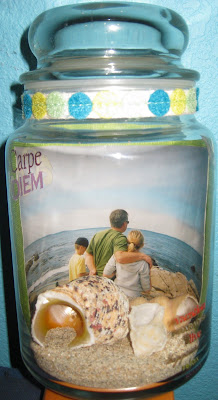 ﻿I put rub-ons on the picture and on the jar.  And, if you use a jar like this and put sand in it...DON'T pick it up by the lid!!!!  Lesson learned LOL!
Thanks for looking :)
Tammy
Posted by ShoppingTamii at 5:01 AM