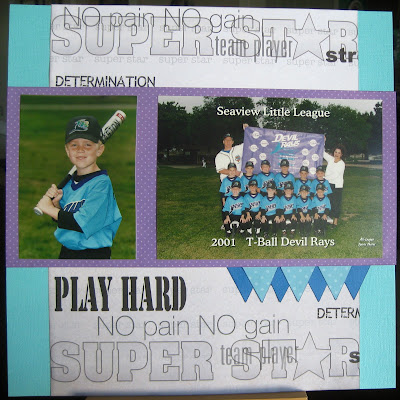 Based on this sketch at If It's Groovy.  I loved this sketch! I had already done my son's "sports" book in 8x8, even bought an extra book so I could add more later...unfortunately, in high school the pictures are 8x10!!!! Oh well, it was one of my first books, so I don't mind re-doing this one ;) That being said, this is my now 15 year old when he was 5 and playing T-Ball--a league away from the Little League World Series champs LOL! We live in the same city, but there are at least 3 leagues here that I know of, we still rooted for them and are very proud that they are from Huntington Beach :) I used the colors of his team, with the blue cardstock and purple dot paper. The sports words paper is from Paper House Productions. I wanted to add a little something something, so I went through my scraps, and used my Fiskars triangle punch to make a little pennant banner.

But, I work in "two pagers" when I scrap, sometimes I mirror pages, sometimes I just make them flow, and sometimes I duplicate. So I used this sketch a second time, except this time I scrapped an OBJECT :) This is my son's name, it was cut from the T-ball team banner, and each of the boys got their's at the end of season party. I added the team name, and again used my Fiskar's triangle punch to make a little banner, and done! 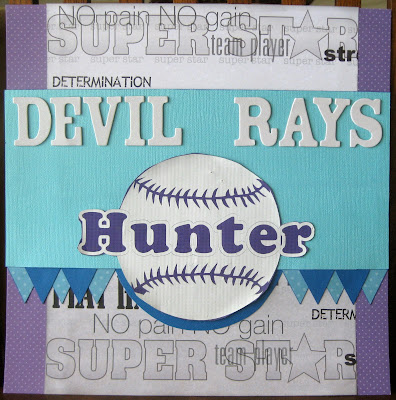