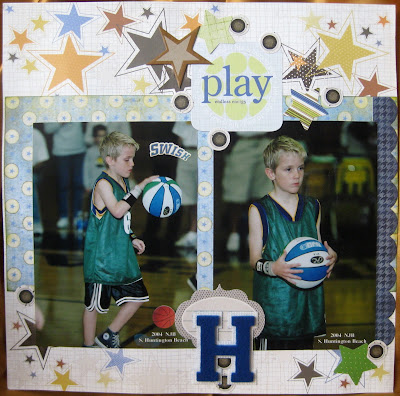 Catching up on my son's sports book :)  I do my books in "two pagers", probably because that's how I learned, and it stuck!  So I got to his spring 2004 basketball photos, and I only had the two big ones...really didn't merit two pages to themselves ;)  Then I noticed that he did a summer workshop that I only had a few (and mostly blurry) pictures that my husband took.  So to flow them together, I did the block of blue with the starred circles in the middle, and then used the same elements on each page.  Makes them work for a two pager, yet sets them apart as two different sessions, KWIM?  The paper is Adornit, I used Thickers for the title, and a hodge podge of embellishments I had on hand.  Thanks, Tammy :)
﻿
Posted by ShoppingTamii at 10:10 AM