Imaginisce has this sketch this month: 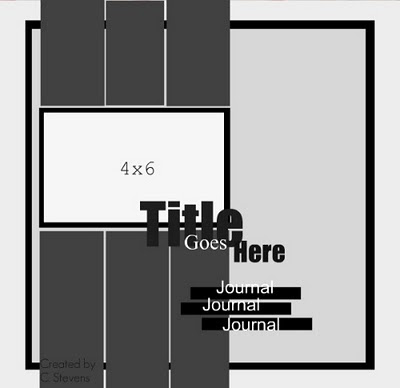 I made this layout: 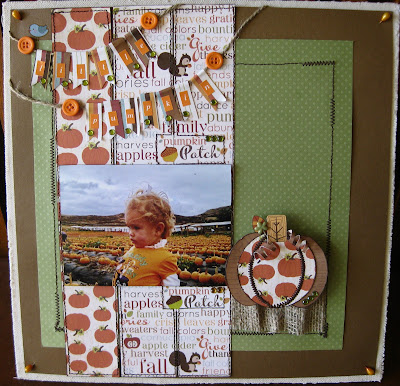 This is my youngest niece, Sophia, who turned 2 today. Her mom had posted this pic on her facebook last week of her trip to the pumpkin patch with her little preschool. Each kid was allowed to have a pumpkin, whatever pumpkin they wanted, but they had to carry it back by themselves...she picked a huge one, and her mom didn't think she'd make it...but she did! It's funny to think that this little girl that only weighed 3lbs 13ozs when she was born picked a huge pumpkin and carried it back all by herself!
some details: 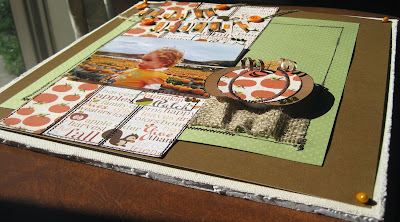 that foam board with the canvas that the layout is pinned to is the back of the shadowbox that I put this in. 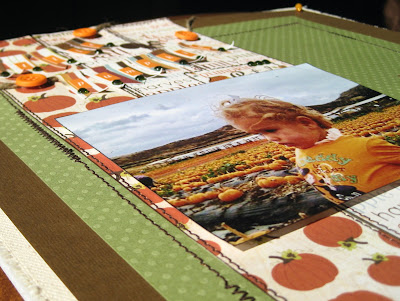 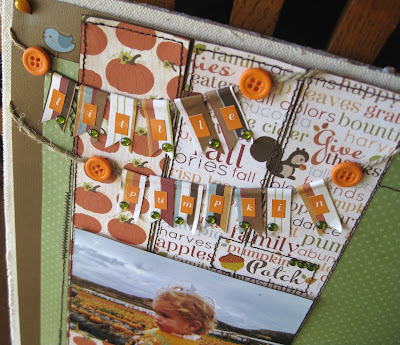 ﻿
I sewed around the words "pumpkin patch", and also used the rub-on acorns over the acorns on the paper, to cover the cut in the paper.  Can you see my bling, love my I-Rock!  I cut the banner from the Apple Cider "Cinnamon Sticks" paper. 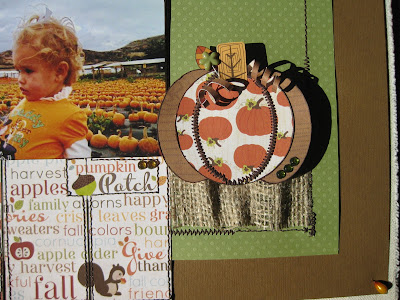 I lifted the pumpkin paper piecing idea from http://lilybeedesign.blogspot.com/2010/10/creating-pumpkin-paper-piecing-from.html ...see the stem?  It's a tree cut from the Apple Cider "Fall in Love" paper.
Here's what it looks like in the shadowbox: 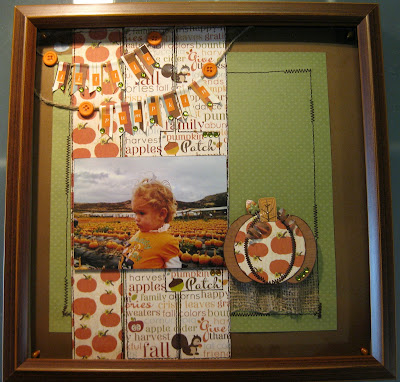 TFL
Posted by ShoppingTamii at 8:52 PM

Great page. Love how you used the text-paper!

Such a cute photo. Love what you have done with the sketch, gorgeous work. TFS!

This is so cute, love the use of burlap and that wonderful pumpkin, very nice!

How adorable! And just lovin't the textural pumpkin!

What a great blog and beautiful layout! Thanks for your comments on my wine bottle at Moxie Fab! Now off to become a follower or yours!

okay, that pumpkin is AWESOME! The banner ads just the right touch! Great take on the sketch!

OMWord! Where do I start? LOve the stitching, texture, paper pieced pumpkin-wow! Just everything! TY so much for playing along with us! :) :)