March is National Craft Month, so in celebration of this awesome month, I decided to alter﻿ the word "CREATE" for my scraproom :)  I found these letters in the dollar bin at Michael's a little while ago, and was so happy to find the right ones to spell it...I think I got the last two "E's" LOL!  I started by picking out the paper I wanted to use (this is always the hardest part for me), I used We R Memory Keeper's "White Out"...love the pretty bright colors: 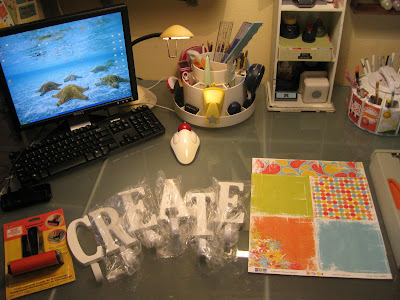 Next I just played with the letters on the paper to decide where to cut before I did it: 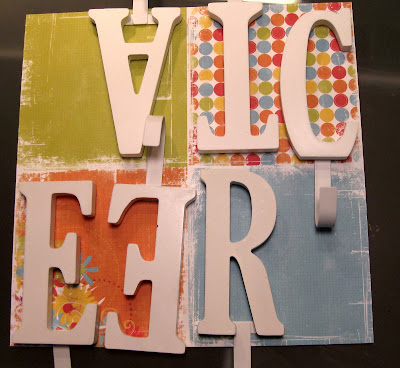 now, I placed each letter reversed on the back side of the paper and traced it: 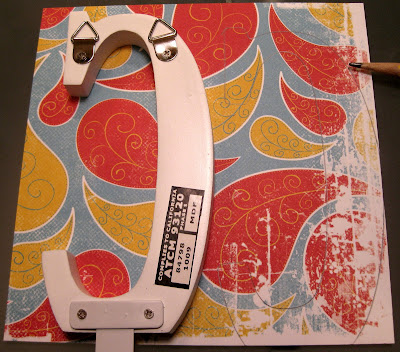 Then I cut them out:

The next step is to Mod Podge (I used hard coat this time) on the back of the paper and place them onto the letters....I used a new Mod Podge brayer I bought myself: 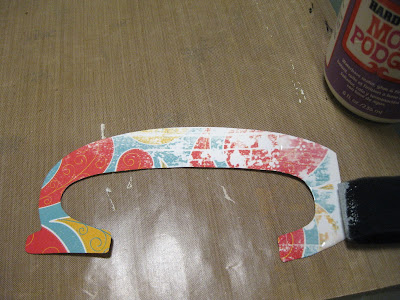 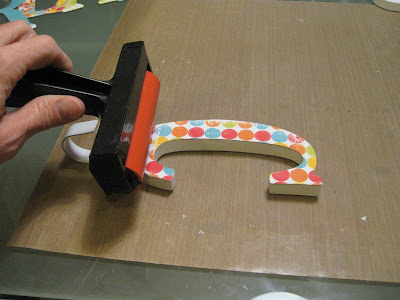 Here they are all glued on: 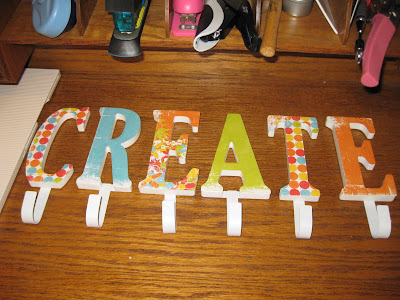 Now, when I cut them from the paper, they weren't a perfect match to the wood letters, so I filed the excess paper down: 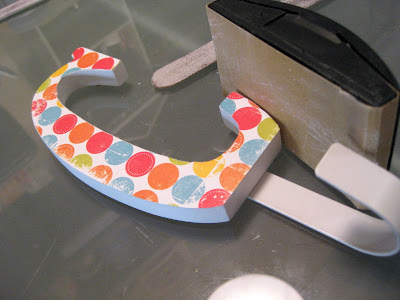 after filing, I noticed that some of the white paint on the wood came off...I kind of didn't mind, it gave them a distressed look, but to finish it off a little I used some watered down Kaiser white acrylic paint (which I thought would go well with the distressed whiteness of this paper): 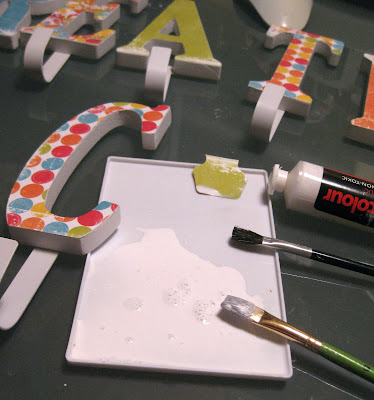 In the next step I had to decide which embellishments I was going to use on each letter, and which ones I was going to Mod Podge over--I do this to seal things on, and for items like this, that I am going to hang, it makes for easier cleaning.  You can see the on the first "E" and on the "T" I didn't add the embellishments yet, because I didn't want to Mod Podge over the Butterfly (from my stash), or the charm and hemp (from my stash).  The "C" I used rhinestones from my stash, the "R" I cut a piece from my Bazzill "Just the Edge" cardstock strips and sewed through the top to make a banner, on the "A" I used a couple of raffle tickets and a metal turn and a pearl from my stash, and the last "E" various buttons from my stash...all which I want to Mod Podge over: 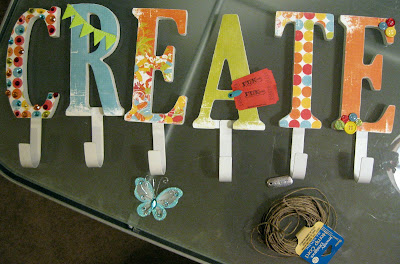 and then I put two coats of Mod Podge on top (note that on the one with the rhinestones, I did wipe it off the very top of the rhinestones so they can still sparkle): 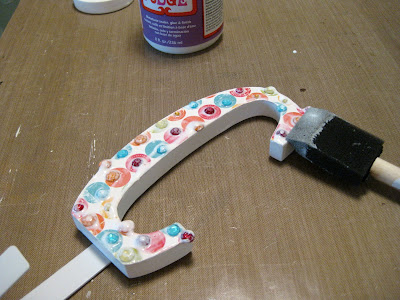 Then I added the embellishments to the last two letters and ended up with this:

This project was done as my design team project at Let's Get Peachy as the lead Altered DT :)  Thanks for looking!!!!
Posted by ShoppingTamii at 6:00 AM

Love it! I'm having a hard time finding that kind of cheap materials to alter here. Tried to buy a simple wooden frame today but it was 25 dollars!!!

This is fantastic! I am working on letters with modge podge right now! I just set them to dry last night and will be embellishing them today! I LOVE the added hooks though! SO cleaver and cute!

Thanks so much for stopping by the Imaginisce blog today and leaving a comment! Don't be afraid of your Cricut! It's so much fun! I never scrap without it! Keep coming back to the IMaginisce blog as every project I do has Cricut in it and you can check out my personal blog too! Aphra is amazing with the Cricut as well and Pinky has a more home decor style (their blogs are on the sidebar of the Imaginisce blog home page). Let me know if you have any questions and I am glad to help!

So cute! Love it!

Lucky you, you're right, normally, all the A's and E's are gone! I so love doing altered letters and love the papers you used! Bright & cheery!

Such a wonderful idea for home decor / organizing. love the way you used different papers on the alphas.