I had to think of a creative way to tell my story.  You see, they don't allow cameras (or phones with cameras) inside.  I knew this because I read the "must know" information on the website that gives away tickets to the Late Late Show...even though I wasn't going through them...I'm a rule follower (drive my husband nuts!), and wanted the details, what to wear, where to park, and so on.  It's funny, because as you read the story, you will find out that some of this was useful, and some was not applied to us :)
I had last heard from my husband's cousin (Pooh's daughter LOL) the day before on facebook with basic information "his agent is getting you tickets; it's on the corner of Fairfax and Beverly; and be there by 2:45, is that cool".  Of course it's cool, LOL!  I was concerned that we hadn't heard more from her, but found out at the taping that she was going to call me that morning with more info...until she dropped her phone into her cereal bowl! 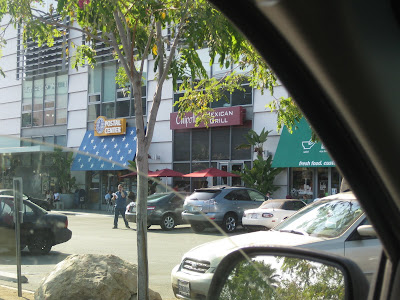 When we got to Hollywood, my husband was hungry. We parked at the Farmer's Market and went to Chipotle. In line in front of us were 3 of the stars from the Young and the Restless (a soap I've watched since I was a kid)...(it was the people who play Lily, Cane, and Devon). My 1st exciting thing of the day :) 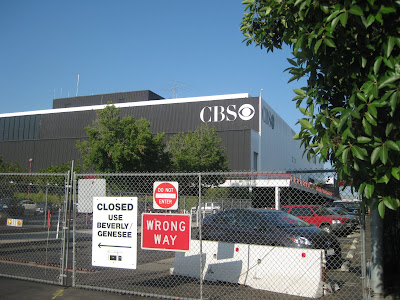 Then we strolled over to the CBS studio, found the line for the audience, and told them we should be on the list (we didn't know, but it was worth trying, right?). At this point we thought we would get tickets and wait in line....(see next photo)... 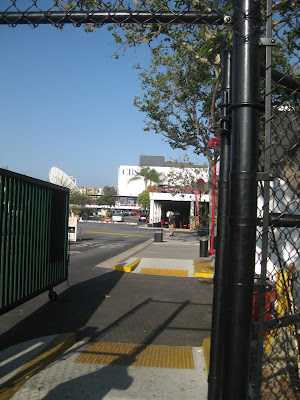 Then the sweet page from the show, Danielle, put wristbands on us...walked us past the line, through the gates, past security, right through the metal detector (yes, we could have brought the camera, but I had no idea!), past the receptionist, up the elevator...into the GREEN ROOM! Woah, you know I'm just the niece-in-law of one of the guest's right?! LOL! They had food and drinks and stuff there for us.  Jimmy (Jim Cummings, Pooh), and his two oldest daughters, Livia and Raleigh, came and said hi (they were in his dressing room). And then we were escorted into the show! After the show we went back to say our goodbyes...and I was about 10 feet away from Zooey Deschanel!!!! She's so pretty! 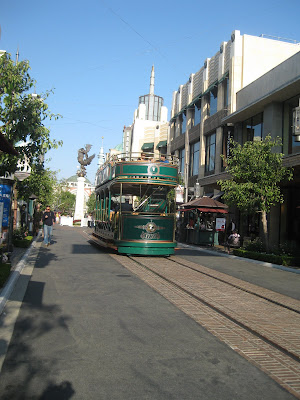 Since it was over at 5:30, and we were in Hollywood and live in the OC, we decided to let the rush hour traffic die down.  We went next door to The Grove to walk around... 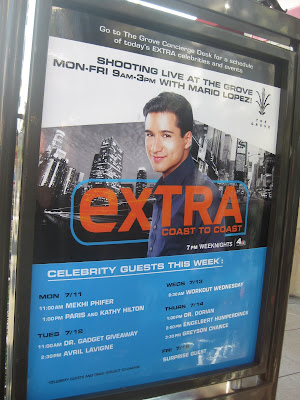 they tape stuff for the show "Extra" there. 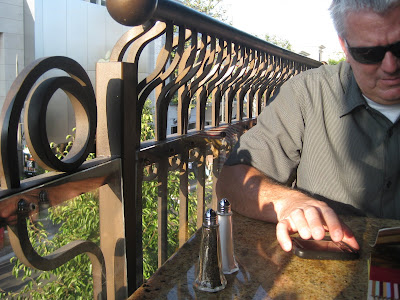 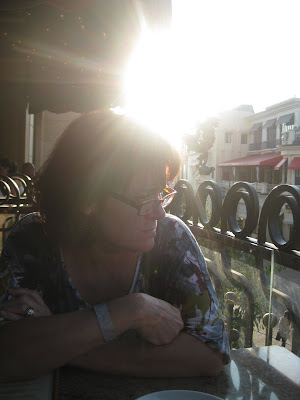 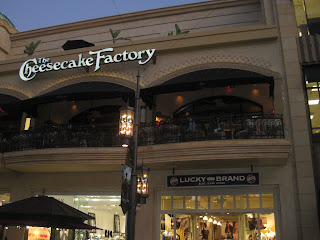 And we ate dinner (btw, I didn't know my husband was taking my picture, so that explains my face LOL!) 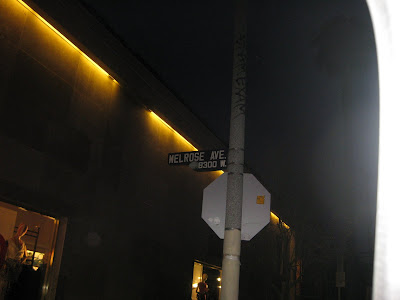 We drove around and acted like tourist down Melrose... 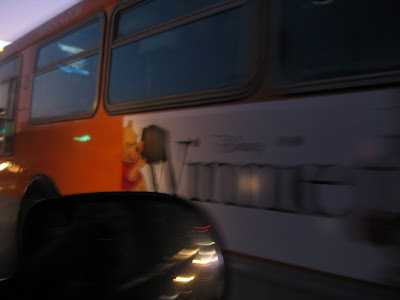 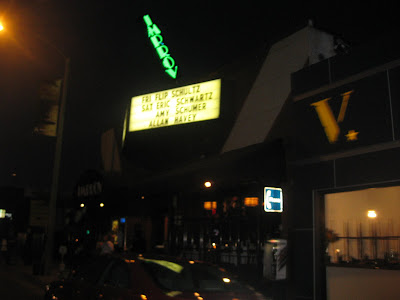 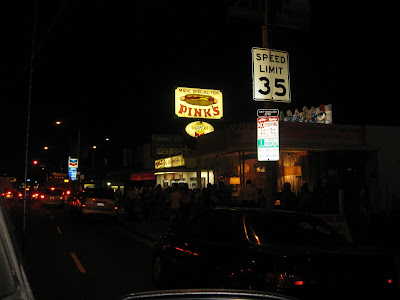 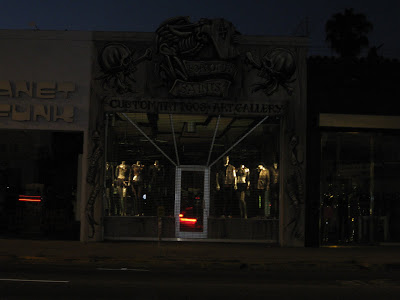 and this is dark, but to explain why we took this photo...
If you've ever seen the shows "Inked" or "Tattoo Highway", you know Thomas Pendelton.  He is a good friend of my husband's, they've known each other since they were kids.  When they did "Tattoo Highway", my husband and Thomas became business partners (shirts and accessories), we were even on the original pilot episode of the show.  The lady who owns this shop is a friend of Thomas' and bought stuff from our company, so Thomas, my husband, and another friend, Anthony, went to do her sign on her request.  The company, Ministry of Ink, for many reasons is not around anymore.  We still have inventory :(  Our biggest client at the time was Hot Topic, but that was a one time thing, and the show only lasted one season, so it just didn't get the free advertising we were hoping for, oh well :)  It was a fun experience anyway!
Okay...wow, that was long LOL!  But it was a fun day, up there with the day I met the Jonas Brothers with my middle daughter (another long story!), and Pink and Carey Hart (through Thomas).  And really, I am just a normal, stay at home mom, who happens to sometimes have out of the ordinary experiences!!!
Posted by ShoppingTamii at 11:55 AM

wow!! looks like such a great time! i'm sooooo jealous!